NORMAN, Okla. – The second of three March Arnold Palmer Cup Rankings for the 2022 matches were released today. The top six golfers from the spring’s final ranking from both the United States and International men and women shall be among the individuals selected to compete in the Palmer Cup. Longtime Arnold Palmer partner Rolex is continuing its 50-plus year relationship through its support of the matches, which will be hosted by Golf Club de Genève July 1-3, 2022.

The next Arnold Palmer Cup Ranking will be announced on March 31, 2022. 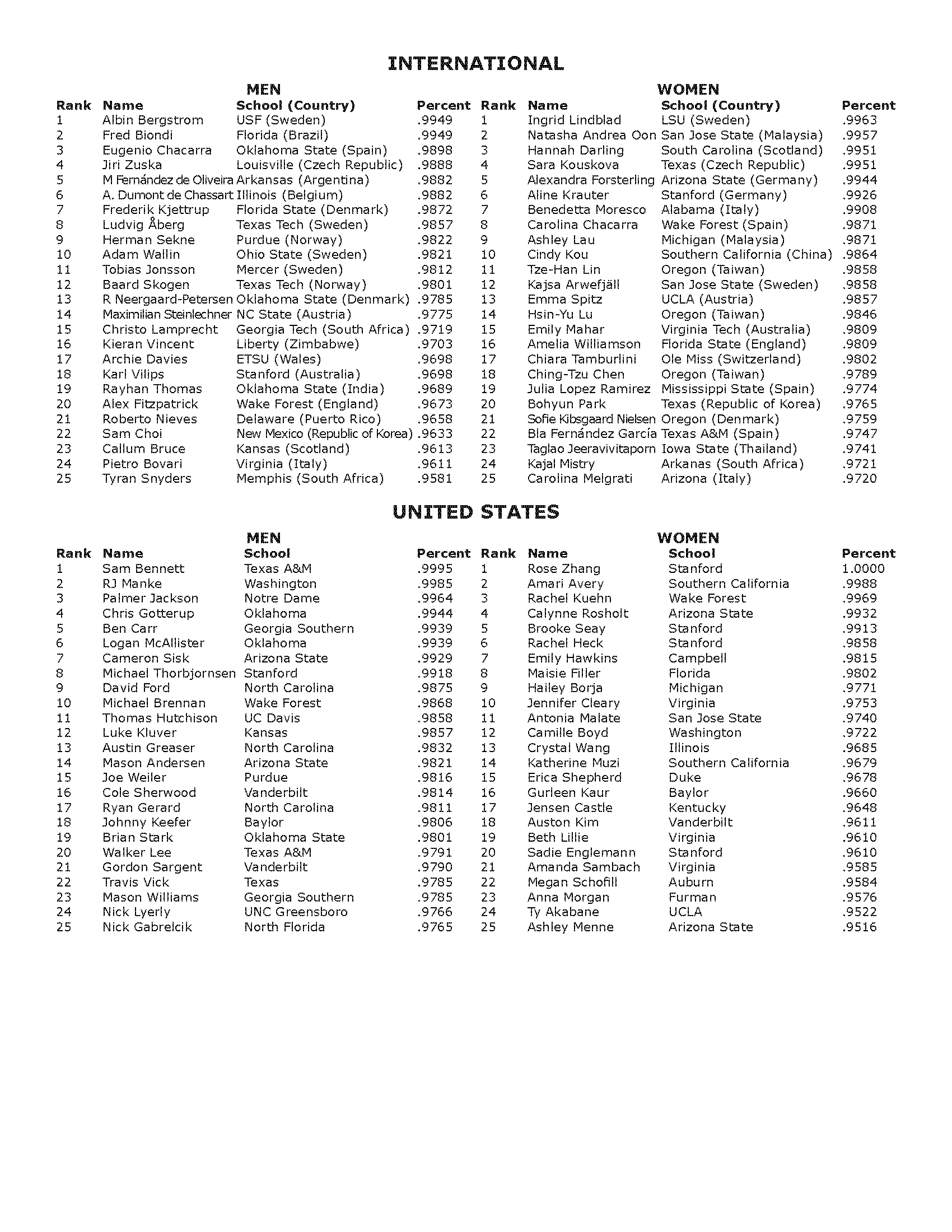 About the Arnold Palmer Cup

The Arnold Palmer Cup was co-founded by Arnold Palmer and the Golf Coaches Association of America (GCAA) and began at the Bay Hill Club & Lodge, Orlando, Fla., in 1997. The event is a Ryder Cup-style tournament featuring the top men’s and women’s university/college golfers matching the United States against a team of International players. The Palmer Cup has been played at some of the world’s greatest courses, including The Old Course at St. Andrews, The Royal County Down, Royal Portrush, Baltusrol, The Honors Course, and Cherry Hills. Beginning with the 2018 matches at Evian Resort Golf Club, the Arnold Palmer Cup is the only major tournament which features men and women playing side-by-side as partners.

Since its inception, over 125 former Arnold Palmer Cup alumni have gone on to earn cards on the PGA, European, or LPGA Tours; 32 have represented Europe or the USA in the Ryder Cup, Presidents Cup, or Solheim Cup and more than 65 have claimed over 285 victories on the PGA, European, or LPGA Tours, including three major champions in both 2020 and 2021. The United States leads the Palmer Cup series 13-11-1.

About the Arnold & Winnie Palmer Foundation

Through an unwavering commitment to the game of golf for more than 50 years, Rolex has developed one of the broadest and longest-standing relationships between brand and sport. These strong ties date back to 1967 when Rolex partnered with legendary golfer Arnold Palmer, making him the first official Rolex Golf Testimonee. The charismatic American holds a special place in golf history thanks as much to his natural talent and successful playing career as to his pioneering role in the sport. Since that pivotal bond began, Rolex has gone on to establish partnerships at every level of the sport, including with the governing bodies responsible for advancing the sport and with the finest players, from The Big Three to the New Guard who lead today’s rankings. The decision to partner with the Arnold Palmer Cup was thus a natural progression for the Swiss watchmaker and a tribute to Arnold Palmer’s inspiring legacy.

An unrivaled reputation for quality and expertise

Rolex is an integrated and independent Swiss watch manufacturer. Headquartered in Geneva, the brand is recognized around the world for its expertise and the quality of its products – symbols of excellence, elegance, and prestige. The movements of its Oyster Perpetual and Cellini watches are certified by COSC, then tested in-house for their precision, performance and reliability. The Superlative Chronometer certification, symbolized by the green seal, confirms that each watch has successfully undergone tests conducted by Rolex in its own laboratories according to its own criteria. These are periodically validated by an independent external organization.

The word “Perpetual” is inscribed on every Rolex Oyster watch. But more than just a word on a dial, it is a philosophy that embodies the company’s vision and values. Hans Wilsdorf, the founder of the company, instilled a notion of perpetual excellence that would drive the company forward. This led Rolex to pioneer the development of the wristwatch and numerous major watchmaking innovations, such as the Oyster, the first waterproof wristwatch, launched in 1926, and the Perpetual rotor self-winding mechanism, invented in 1931. In the course of its history, Rolex has registered over 500 patents. At its four sites in Switzerland, the brand designs, develops and produces the majority of its watch components, from the casting of the gold alloys to the machining, crafting, assembly and finishing of the movement, case, dial and bracelet. Furthermore, the brand is actively involved in supporting the arts and culture, sport, and exploration, as well as those who are devising solutions to preserve the planet.

The exclusive footwear, apparel, headwear, and glove supplier of the Arnold Palmer Cup, our mission is what drives us to do everything possible to expand human potential. We do that by creating groundbreaking sport innovations, by making our products more sustainably, by building a creative and diverse global team and by making a positive impact in communities where we live and work.